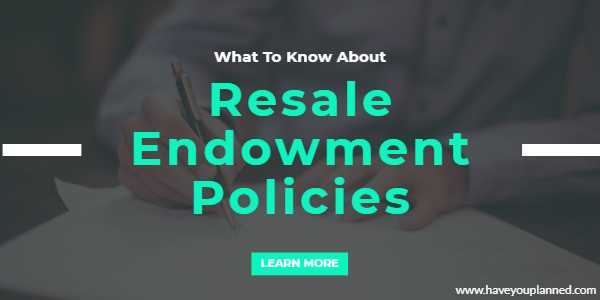 In greater details, Resale Endowment Policies are insurance plans that are still in-force (premiums are still being paid) but the previous owners have decided to surrender these plans due to various reasons and they are sold to certain parties (usually a company) and this new owner will either hold on to it till maturity or to resell it – and those plans that are being re-offered are known as Resale Endowment Policies.

If you are interested in Endowment Insurance Policies because you do not need to monitor (unlike investing or with ILPs), it “forces” you to commit to saving for a certain number of years (and you get to enjoy an average return of 3-5% per annum) but you do not like the idea of saving it for very long (especially if it’s those Policy Terms like 25 years and beyond…)… you might be interested to look into the Resale Endowment Policies!

If you are new to these two terms… they are not some latest terms that just popped out of nowhere and these concepts have existed like over 20 years ago (some sites quoted that it existed since 1843) and it is just getting well-known in Singapore in the last few years.

About The Traded Endowment Market

In this market, if the Policy Owners of their Endowment Plans decide to give up the plans because they are unhappy with the Insurance Companies/Financial Planner, Divorce or they just want some quick cash… instead of surrendering directly back to the Insurance Companies and suffer the Early Surrendering Penalty… they can turn to these Traded Endowment Companies whereby the Endowment Plan will be evaluated and most of the time, these insurance plans can be traded in with an average of 1-5% (this value really varies) more on top of the Surrender Value.

The whole process is totally legal because both parties will have to go through the Absolute Assignment Process whereby the First Owner will give up all the rights to the benefits of the Plan and the Second or New Owner will retain the rights and in return, they will commit to pay the remaining premiums.

About The Resale Endowment Market

As mentioned above, these Traded Endowment Companies can turn to the Resale Endowment Market to sell off those Endowment Policies that they have previously bought. This Market is suitable for those who are interested in the benefits behind Endowment Policies minus off having to commit to the full term of plan. You can also refer this concept like a Modified Fixed Deposit Plan whereby one gets to pay a smaller lump sum and the option to pay regular premiums… and still enjoy a slightly higher return than the usual Fixed Deposit Plans.

This whole process is also totally legal whereby both parties will have to go through the legal process of doing up the Absolute Assignment.

To read up more on Traded Life and Traded Endowment Plans, you can also check out this article by Moneysense.

For The Sellers – Why Should You Sell Instead Of Surrendering Your Endowment Plan?

If you decide to surrender your Endowment Plan back to the Insurance Company at an early stage, there is a high chance that you will incur a huge loss.

So selling your Endowment Plan to those companies will usually give you a higher value and you will also receive the payout earlier (usually at the spot, with a cash cheque, right after signing the documents). These two reasons ensure that you enjoy a higher return and a faster processing time (if you are in need of the money).

For The Buyers – Why Should You Consider Buying A Resale Endowment Plan?

There are a few good reasons for you to consider buying a Resale Endowment Plan for savings or investment purposes.

Do not just buy because you like the name of the Insurance Company or the different perks it offer for their Endowment Plans. You have to go for those Resale Endowment Policies that can give you a significant return in exchange of you having to invest back to become the New Owner.

This site uses Akismet to reduce spam. Learn how your comment data is processed.